Accueil » Squad building: The enormous task ahead of Arsenal this summer

It’s going to be a busy summer at Arsenal. Having finished eighth in the Premier League for a second year running, yet another overhaul is required. Mikel Arteta has been in charge of the team for two transfer windows so far, both overshadowed by the pandemic, and a third is likely to be heavily impacted again as clubs on the continent in particular struggle to balance the books.

Before we even look at players who could arrive, there are decisions to make on players who were on loan last season, players who disappointing with us, players who have contracts coming to an end, and anyone else Arsenal might want to move on. After all that, the club will have to both sign players to improve on the existing options and players to fill in remaining gaps in the squad, all while making sure there aren’t too many players at the club with no European football next season. It will be quite the juggling act.

Having a look at the clubs who finished around us last season who didn’t have European football, and clubs who have had surprise title challenges before (not that any Arsenal fan should be expecting one of those) in seasons without European football, it becomes immediately clear that the Arsenal squad needs to get smaller before anything else can happen. 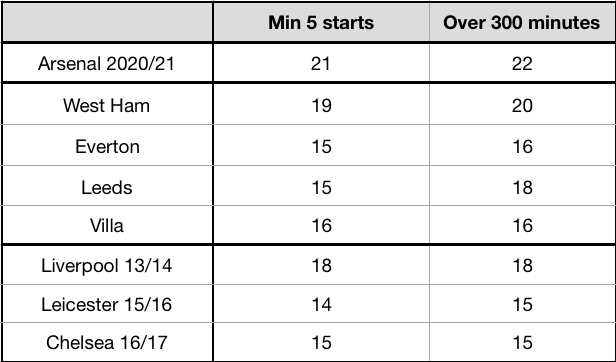 It would be unrealistic to expect the Arsenal squad to be as small as some of those but it quickly becomes clear that our squad does have to be smaller than it was in 2020/21. Players like Nketiah and Bellerin are likely to leave but there is no need to bring anyone in to take their minutes unless there are further exits in their respective positions.

So Arsenal, realistically, need a first XI, then maybe seven or eight outfield players who will feature semi-regularly as cover for those positions. Anybody else still at the club come September is unlikely to play much at all. That makes the likes of Calum Chambers and Ainsley Maitland-Niles more attractive as players who probably won’t become starters but are squad options with the ability to cover multiple positions. The case of Joe Willock is particularly complicated, unless Arteta changes tack somewhat next season and makes space for the midfielder.

A new goalkeeper is needed even if Bernd Leno stays, as either competition or backup. If Leno leaves, two goalkeepers are needed. A first choice centre-back needs to be decided. William Saliba could come in and compete for the role. If he doesn’t and someone is signed, it’s hard to justify keeping the Frenchman around as a fifth or sixth option in that position. A first choice right-back is a priority, while a backup left-back is also definitely required.

At least one central midfielder is needed no matter what. Someone who can play alongside or instead of Thomas Partey. If Granit Xhaka is sold, a second central midfielder will also be needed. If Mohamed Elneny is sold, there is a gap for Ainsley Maitland-Niles to perform a squad role as fourth choice in his favoured position as well as filling in as a backup wing-back. This looks like an appealing option, especially as Partey and Elneny are both set to miss January due to their involvement in the African Cup of Nations.

An offensive midfielder is needed, preferably someone who can also play wide akin to Emile Smith Rowe so the two of them can play together if and when it’s needed. A backup striker could be needed if Gabriel Martinelli and/or Folarin Balogun aren’t considered ready to lead the line in Pierre-Emerick Aubameyang’s absence. Alternatively, Alexandre Lacazette could be kept for the final year of his contract, though that is unappealing if it means rejecting suitable offers for him as we look to strengthen in other positions.

And all that leaves us with this …

If we did business for all of those positions, it would mean seven new players (eight if Xhaka is sold, nine if he and Leno both depart) this summer alone. The summer of 2011/12 is the only time Arsenal have brought in as many as seven new first team players, and that included four on a mad deadline day dash.

And even then, and while excluding Azeez and Balogun, there are 13 first team members Arsenal have to make some sort of decision on this summer before having some clarity on squad spaces and finances. Some – Cedric, Willian – may be hard to move even if the club want to move them on. Others – Saliba, Maitland-Niles, Willock – could return from loan spells to take squad places. Incorporating at least a couple those players in next season’s squad seems like a logical way to save both time and money, allowing more time to focus on more pressing needs. At least in those cases, unlike Lacazette’s, the players could still be sold next summer if they are dissatisfied or the club want to move on from them.

The list of potential exits and requirements to come in is truly enormous and you really have to wonder just how much Arsenal manage to get done, especially in a summer with the Euros, Copa America, and the Olympics.

Edu and Arteta finds themselves with their hands full and we’ll just have to see how they cope.