WSL champions Chelsea have five representatives in the team, with four Manchester City players included and two from Arsenal

Sam Kerr and Fran Kirby are among five Chelsea players in the 2020-21 PFA Team of the Year, with Arsenal star Vivianne Miedema being one of the notable absentees.

Kerr was top scorer in the Women’s Super League with 21 goals in 22 games, as Chelsea lifted the title on the final day of the season, losing just one match in the competition. Kirby, meanwhile, was one of only two players to hit double figures for goals and assists.

The other of those was Chloe Kelly, who is one of four Manchester City stars in the team after they finished in second place, two points behind the title winners. Arsenal clinched the final UEFA Women’s Champions League spot and have two representatives in the side.

Who is in the PFA Women’s Super League Team of the Year?

Joining Kerr and Kirby in the side are three Chelsea team-mates, with Ann-Katrin Berger in between the sticks with Maren Mjelde and Magdalena Eriksson in defence. Mjelde had another typically reliable campaign, showcasing her versatility at times to fill in all over the pitch when needed, before a season-ending knee injury in the Blues’ Continental Cup victory back in March.

Eriksson has continued to prove herself as one of the best centre-backs in the world, while Berger came up with huge moments in huge games, most notably with her stunning reaction save in the 2-2 draw with Man City in April that would be crucial in winning the league.

With Kelly on one wing for this team, her City team-mate Lauren Hemp is on the other, having recovered from an injury-hit first half of the season to return to her best level after Christmas. Caroline Weir, whose season highlight was a delightful lob in February’s Manchester derby, and Sam Mewis, the U.S. women’s national team star who had a sensational first season in England but has since returned to the North Carolina Courage, slot into midfield.

Arsenal’s representatives complete the defence, with Leah Williamson enhancing her reputation as one of the best young centre-backs around with another solid season, while Katie McCabe fills the left-back spot after 11 assists, a tally that, level with Kelly, was a league high. 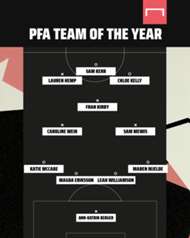 Who is missing from the WSL PFA Team of the Year?

Miedema is the headline omission, the Dutch star bagging 18 goals in 22 games but not getting the nod. She has been named in the PFA Team of the Year for the last two seasons and was also named PFA Players’ Player of the Year in 2019.

Alex Greenwood is another player to miss out, after a career-best season with Man City, while Melanie Leupolz had an incredible first season with Chelsea after signing from Bayern Munich last summer.

Manchester United’s Ona Batlle is another new face who had a great first year in England, while there were plenty of contenders for the goalkeeping position, with City’s Ellie Roebuck and Everton’s Sandy MacIver among the league’s other star performers.

When are the rest of the WSL’s PFA awards announced?

Berger, Kerr, Kirby, Kelly, Hemp and Mewis are all up for the main award, following their inclusions in the team of the year.

Hemp is also nominated for the young player award, which she won in both 2018 and 2020. She is joined by City team-mate Roebuck, Manchester United duo Lauren James and Ella Toone, Chelsea’s Niamh Charles and Ebony Salmon, who recently signed for NWSL side Racing Louisville after a superb season with relegated Bristol City.

The awards will be broadcast across the PFA’s social channels at 7:30pm BST.