Kieffer Moore’s header cancelled out Breel Embolo’s effort as Switzerland and Wales drew 1-1 in their Group A Euro 2020 opener.

Embolo powered the Swiss into the lead early in the second half and it seemed as though it would be enough to take all three points. But, against the run of play, Moore was also on target with his head to ensure the points were shared.

Mario Gavranovic found the net with his first touch on 85 minutes to bag what looked like the winner. But he was ruled offside as VAR came to Wales rescue.

Gareth Bale and Granit Xhaka lead the two sides out in sunny Baku. There were a few Wales fans on hand to support their heroes and they made themselves heard.

And the game stated brightly, with Aaron Ramsey and Joe Allen combining well for Robert Page’s side. But the Swiss had the first chance, with Kevin Mbabu heading wide from Ricardo Rodriguez’s cross.

Despite the heat the game continued to flow. And on 15 minutes Wales carved out an excellent chance. Daniel James left Mbabu for dead before delivering a superb cross.

Kieffer Moore’s header was goal bound but Yann Sommer managed to palm the effort away. Moore and Mbabu then clashed, leaving the Welshman sporting a bandaged head.

Switzerland tested Danny Ward on 20 minutes, with Newcastle’s Fabian Schar flicking a corner towards goal at the near post. Ward we equal to the task and saved well with his foot.

Vladimir Petkovic’s men started to find their feet as the half progressed and Xhaka fired wide for distance. And it was the same result when Haris Seferovic repeated the dose as the half hour approached.

The same player has two further shots but Wales hung on and it remained goalless at the interval. But it took the Swiss just four minutes to open the scoring in the second period.

Wales failed to deal with Shaqiri’s corner and Borussia Monchengladbach’s Embolo powered a header past Ward. It was no more than Switzerland deserved as they had forced many corners and were in control.

Far from sit back and admire their work, the Rossocrociati could easily have made it two just three minutes later. The excellent Embolo breezed past the Welsh defence before sliding the ball into Mbabu’s path. But his effort slid just past the post.

Wales appeared strangely subdued and rarely threatened the Swiss goal in the third quarter of the contest. But Ramsey’s dangerous cross almost found its way to Joe Rodon on 64 minutes.

The Swiss responded through Embolo whose curling effort flew just past the post a minute later. Page’s side tried to up the pace as the half wore on but the Swiss dealt with anything thrown at them. 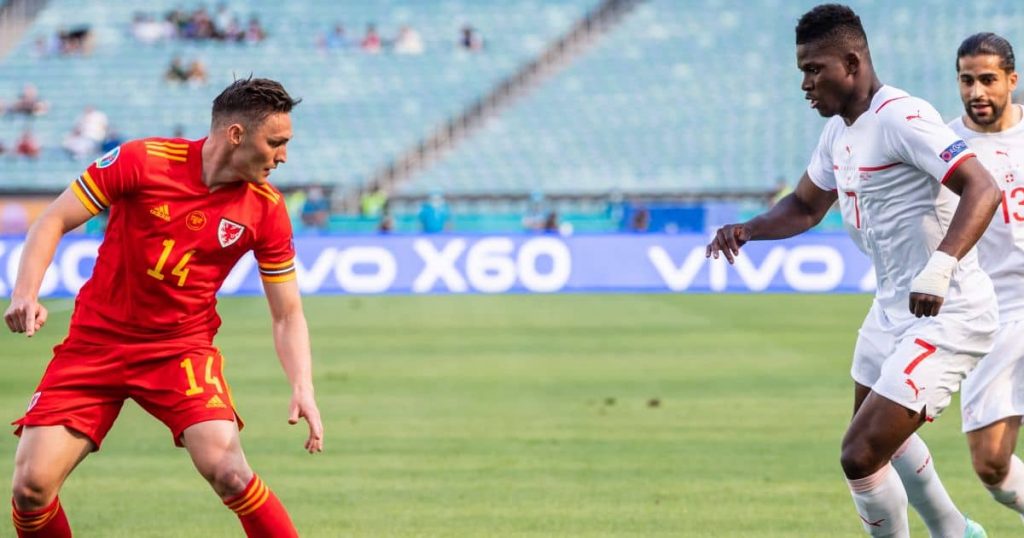 However, the Dragons were level on 74 minutes. From a corner, the ball was worked to Joe Morrell, whose cross found the unmaker Moore and the Cardiff man glanced his header home.

That sent the Wales fans into raptures after their men had been second best for most of the contest. It was just their second effort on target in the match and the first since the 15th minute.

It seemed as though the Welsh fans’ hearts would be broken as Gavranovic found the net soon after coming on. But he was eventually ruled offside much to their relief.