Anyway, what about when it works out the other way around? What about those footballers whose parents just about made a living in the professional game, but who themselves went on to become superstars?

There have been a fair few of them, too, and their folks’ stories are not always as well known. Here, we’ve picked out six star players whose parents were journeymen or journeywomen pros.

Romelu is one of the finest strikers in world football, scorer of 62 international goals and winner of the 2020-21 Scudetto with Inter Milan. But long before he was the hero of the Belgian nation, his father was making a modest living playing in the country’s professional leagues.

Roger Lukaku was born in Kinshasa in 1967 in what was then Zaire, now the Democratic Republic of Congo. He started out at a club called Vita Sports in his homeland before earning a move to Africa Sports, one of the big guns of Ivorian football.

In 1990, Roger uprooted to Belgium, where he spent the rest of his career, bar one season in Turkey with Gencerbirligi. In Belgium, where sons Jordan and Romelu were born, Roger played started off in the second tier with FC Boom, before playing in the top flight for Seraing, Germinal Ekeren, KV Mechelen and Oostende, before retiring in 1999.

Though he had a solid career, it was not enough to make Roger and his wife Adolphine wealthy. In 2018, Romleu wrote on the Players’ Tribune that his mother would water down milk to make it go further.

“We didn’t have enough money to make it [the milk] last the whole week,” Lukaku recalled. “We were broke. Not just poor, but broke.

“My father had been a pro footballer, but he was at the end of his career and the money was all gone.”

Romelu went on to say that he used that hard upbringing as motivation and it has clearly worked. He’s gone to the very, very top.

David Trezeguet may have represented France at the international level – winning a World Cup and European Championship, no less – he was also Argentinian through and through.

The striker was the progeny of defender Jorge Trezegeut, an Argentine of French descent who was playing for Rouen in Normandy at the time of David’s birth. Other than those three years in northern France, however, Jorge spent his whole career and all of young David’s early years in Buenos Aires.

Jorge played for Chacarita Juniors in two separate spells as well as Estudiantes, Almagro, Deportivo Español, Sportivo Italiano, El Porvenir, with a lot of his time spent in the second tier.

In 1974, he gave a false positive doping test, which he was later cleared of but blamed for hampering his career progress.

At the end of a successful playing career in Europe, David returned home for a glorious promotion season with local giants River Plate…

The greatest footballer of all time didn’t just appear out of the aether, did he? No, no, no; he had the genes to excel.

Pele’s old man Dondinho – or Joao Ramos do Nascimento – never made it to the very top of the footballing ladder in Brazil, but according to those who saw him in action, it was more a case of bad luck than a lack of skill.

After playing for a couple of small, provincial sides, Dondinho got his chance with Atletico Mineiro in 1940. He played just once, injured his knee and never got another opportunity. His son Edson, who Dondinho named after the American inventor Thomas Edison, was born that year.

The details of what happened next are a little sketchy and versions conflict, but after bouncing around, Dondinho ended up playing for the modest Bauru Atletico Clube in the city of Bauru in Sao Paulo state, which is where his superstar son got his first taste of the game.

Old-timers from Tres Coracoes, the city where Pele was born, swear that Dondinho was the best footballer in the family.

“He was a craque,” Victor Cunha, the ex-president of Atletico de Tres Coracoes told Globo in 2020, “A centre-forward who didn’t just stay in the area. He knew how to play on the floor, as well as being a great header of the ball. Once, when Atletico won a title, Dondinho was carried around the city [by the fans].”

Clearly the family lineage was strong. As well as Pele, another son, Zoca, played professionally (although to no great success), as did Pele’s son Edinho, who spent four years as Santos goalkeeper.

Neymar Sr. is well known for the hand he has in organising the financial and professional affairs of his super-famous footballing son. Less well known, perhaps, is the story of his own relatively unsuccessful football career.

From 1989 until 1996, Neymar Pai played for Uniao Mogi, a side from the town of Mogi das Cruzes that then played in the third tier of the Sao Paulo state championship. In 2017, a former director of Uniao told UOL: “He was slow, but he was good with both feet… very skilful.”

After his first season at Uniao, a slightly larger club tried to come in to tempt Neymar away from Mogi, but a group of local businessmen clubbed together to pay him a higher salary and tie him down.

In 1992, Neymar Sr. suffered a serious car accident, dislocating his hip. He kept going, however, and later played for a club in Parana state and Operario in Mato Grosso do Sul, where he won the state title.

His former strike partner Gil Paulista told UOL: “I learned a lot with Neymar in terms of professional behaviour. He was five or six years older than me. He was a great professional.”

More recently, Neymar Sr. has applied that professionalism and commitment to his other passion: tax evasion. Mind you, he’s not been much more successful with that than he was with football.

Probably the most famous of the dads here is Erling Haaland’s father Alf-Inge, who made it to the Premier League with Nottingham Forest, Leeds and Manchester City in the 1990s and early 2000s after coming through at Byrne in his native Norway.

Haaland senior also got 34 international caps, so calling him journeyman might be a tad strong, but there’s no doubt his professional achievements are all going to be eclipsed by his son, the coming man of world football.

Alf-Inge’s career could and perhaps should have been longer, but it was ended by injury in 2003, which is often attributed to Roy Keane’s horror tackle on him in 2001. In fact, Haaland retired after surgery on his left knee, rather than the right that Keane kicked, but there is no doubt the challenge was a potential career-ender.

Keane later said: “I did want to nail him and let him know what was happening. I wanted to hurt him and stand over him and go: ‘Take that, you c***.’” 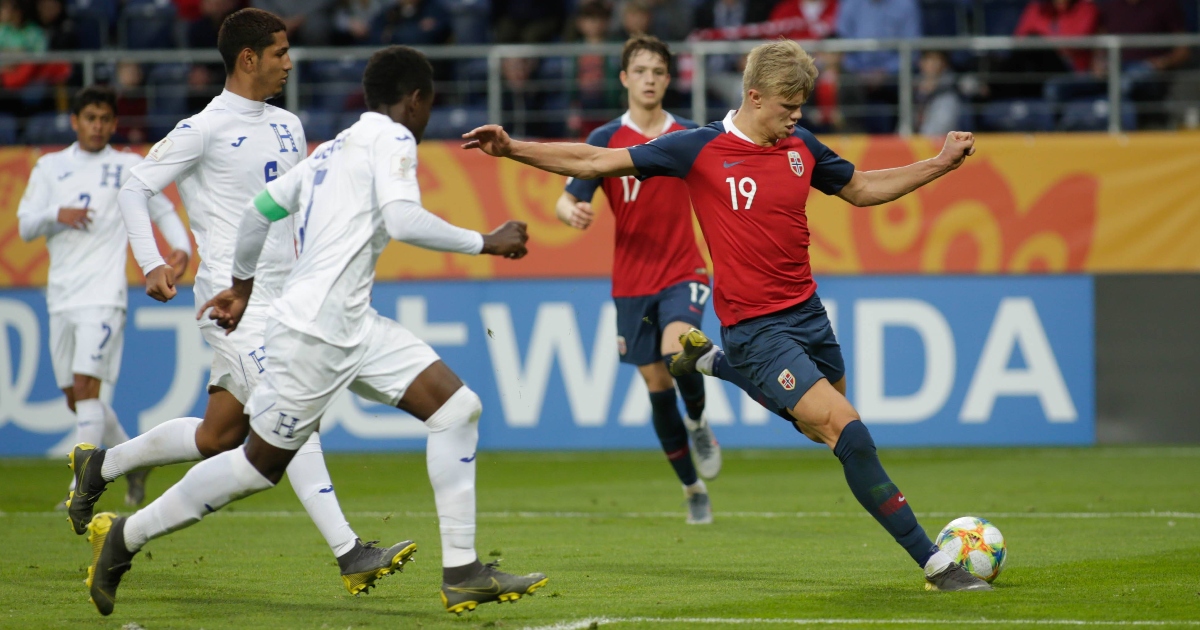 READ: A forensic analysis of Erling Haaland’s nine goals against Honduras in 2019

If you search Thierry Hazard on the Google, the first result that comes up is a mulleted French popstar who reached No.2 on the French charts in 1990 with hit single ‘Le Jerk’.

“When Josephine leaves the office,” Thierry Hazard sings, “She goes immediately to the house of her cousin Berthe. Together they run to Club A Gogo where they dance le Jerk.”

A disco classic, no doubt.

Alas, we are not here to talk about that Thierry Hazard.

Rather, we are interested in the Belgian Thierry Hazard, a former footballer and husband of Carine Hazard, also a former footballer, who together (most of the work done by Carine, we should add) produced Eden, Thorgan, Kylian and Ethan Hazard, all footballers of varying degrees of career progression and fame.

Carine was the more accomplished player, turning out in the Belgian top flight for six years. She hung up her boots when she was four months pregnant with Eden, later telling Le Parisien, “Eden scored goals before she was born thanks to me!”

Thierry, meanwhile, scrabbled around in the semi-professional third tier, mostly playing for La Louviere as a defensive midfielder. Both Thierry and Carine later became PE teachers.

As footballing families go, the Hazards take some beating. Now we’re waiting to see what the grandkids do.

Can you name the top 20 Brazilian goalscorers in the Champions League?