We’re playing FanTeam’s Euro 2020 Fantasy tournament this summer – and despite our relative lack of confidence, we’re currently in profit.

With a minimum guaranteed prize pool of £1million and a guaranteed first-place prize of £200,000, this is the biggest prize pool ever for a Euros event. It cost £20 to enter, but even finishing in the top 10,000 will win you a payout of £30 and we’re currently 9699th after the group stages so on for a tidy £10 profit.

It’s too late to join this competition if you haven’t already, but you can still sign up to play Daily Fantasy contests which take place every day. There’s currently a £75,000 competition you can enter so there’s still the chance to make the most of your knowledge during the Euros.

As for those of you playing alongside us in the main tournament, we’d love to hear how you’re getting on. Here’s our update from our head coach, Sam Bannister, and his team for the last 16. 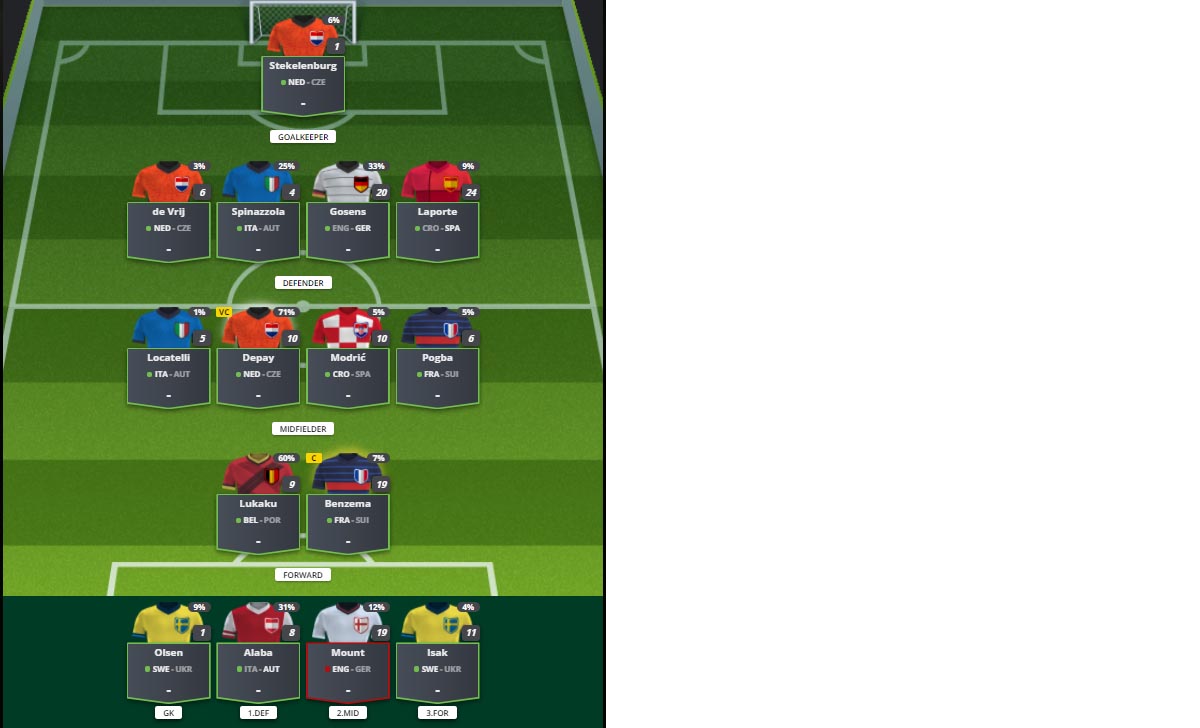 The group stages had some highs and some lows for my team. Having Leonardo Spinazzola and Robin Gosens in from the start both paid off as I was hoping, whereas the likes of Hakan Calhanoglu didn’t offer me much at all.

I’m quite happy with how things have been going overall, though. Some of my bigger names like Memphis Depay, Paul Pogba and Luka Modric have been starting to add up the points and hopefully there will be more to come. Even Robert Lewandowski, who I’ve had to transfer out after Poland getting knocked out, got me a fair few points.

For the knockout stages, I’ve made three changes, getting rid of Lewandowski and Wojciech Szczesny (whose own goal in Poland’s first game wasn’t appreciated!) for obvious reasons. I’ve also had to remove Lucas Hernandez (who I’d only transferred in just before the game he got injured in).

Replacing those three are Karim Benzema, who I’ve made captain as he seems to be getting into a rhythm, Aymeric Laporte and Robin Olsen, the latter just for the bench.

Those changes are in addition to the two I made in the group stage, bringing Hernandez in at first for Cesar Azpilicueta, and replacing Calhanoglu with Manuel Locatelli – who didn’t play in the group match after I brought him in, but I’m hoping it’ll work out in the long-term.

So it could be going better, but it could be going worse. My current rank is #9699 which isn’t too bad given how pessimistic I was about my chances going into the tournament! Hopefully things keep improving for my team in the next couple of rounds.

Sign up at FanTeam to enter Daily Fantasy contests every single day during Euro 2020.