Wales were knocked out of Euro 2020 in the Round of 16 after losing 4-0 to Denmark in a game in which they were outclassed by a side with rising confidence.

Denmark have been building into a stronger rhythm since recovering from the shock of Christian Eriksen collapsing in their first group match. Both these countries finished second in their respective groups, but one looked a level above the other when they met in Amsterdam.

Ultimately, a brace from ex-Ajax striker Kasper Dolberg on his former home turf and late strikes from Joakim Maehle and Martin Braithwaite ensured Denmark kept doing Eriksen proud, while ending any hopes Wales had of matching their run to the semi-finals in 2016.

The game started with a nice flow either way, with the first decent chance coming to Gareth Bale. The Wales captain swung a shot wide of the post within the opening 10 minutes.

Another half-chance came via Daniel James, whose shot took a bit of a deflection but did not trouble Kasper Schmeichel.

But it was Denmark who took the lead in the 27th minute with a much cleaner finish than any of the attempts Wales had managed up to that point.

Mikkel Damsgaard received the ball on the left wing and deftly set up Dolberg. The striker got the ball out of his feet and curled a shot beyond Danny Ward’s reach.

There was nothing the goalkeeper could do; the ball curled in and nestled in the bottom corner to give the Danes the lead.

Some strike from Kasper Dolberg…

Damsgaard and Dolberg linked up again soon after as they looked to build on their advantage. The latter tried to flick the ball past Ward from close range with the outside of his boot, but the Leicester keeper easily got his body in the way.

As half-time approached, there was another blow for Wales when Kieffer Moore was booked. His second yellow card of the tournament, it meant he would be suspended for the next round.

But to even reach the next round, they had to get at least one goal back.

It didn’t look like they would be the next to score, as Denmark finished the second half strongly. Maehle saw one shot tipped behind from close range, for example.

By this point, Wales had already been forced into a substitution as well. Connor Roberts was in clear discomfort after going over and had to be replaced by Neco Williams. 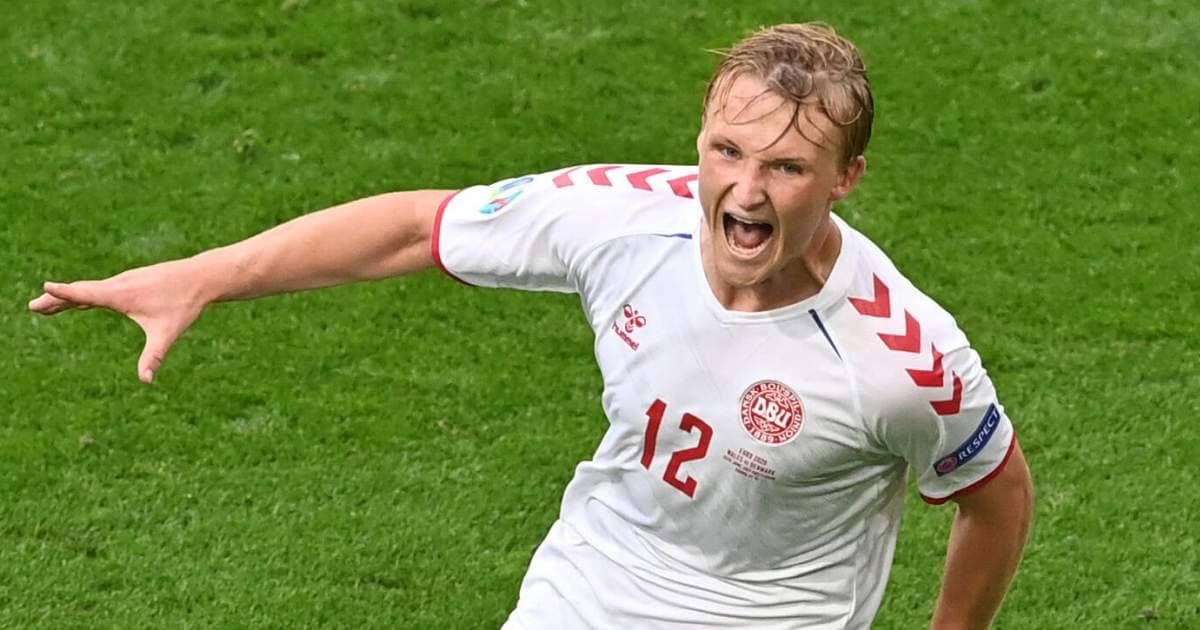 The second half did not start in ideal fashion for Wales, either. Williams was at fault as they went 2-0 down in the 48th minute.

Denmark broke away on the counter attack, despite a hint of a foul on Wales forward Moore. As the ball went into the box, Williams got his clearance all wrong and sent the ball straight to Dolberg. The striker provided a powerful finish from close range.

A nightmare moment for Wales – but should the goal have stood?

It gave Robert Page’s side a mountain to climb, but there could still have been time for them to get back in it.

Williams tried to atone for his error by sending in an inviting cross at the other end, but Bale got to it before the better positioned Moore and failed to get any power on his header.

Wales kept pushing and had another chance when James saw a shot blocked by Andreas Christensen. It looked to have been going off target anyway.

They had to stay alert at the other end to avoid the deficit increasing any further. Ward was almost caught out by a cross from Mathias Jensen, which fell just wide of his post.

As the final 10 minutes approached, Barcelona forward Braithwaite sent a free kick over the bar for the leaders.

Denmark somehow missed a chance for a third goal as well when Braithwaite and Joachim Andersen both failed to convert from inside the six-yard box.

But they did increase their lead with a few minutes to spare. Maehle found himself in acres of space on the right-hand edge of the box, cutting in and firing home with his left foot.

“And they’ve blown Wales away”

And it got even worse for Wales when Harry Wilson received a red card for clipping Maehle. It seemed a harsh decision, but it summed up their miserable evening.

Denmark then scored a fourth goal when Braithwaite fired in during stoppage time. The linesman initially ruled the goal out for offside, but there was a lengthy VAR check. After it completed, the referee indicated that the goal stood.

Thus, the Euro 2020 journey is over for Wales. As for Denmark, though, they can keep dreaming as their remarkable story goes on.